A sample of some of the press attention the band have received: 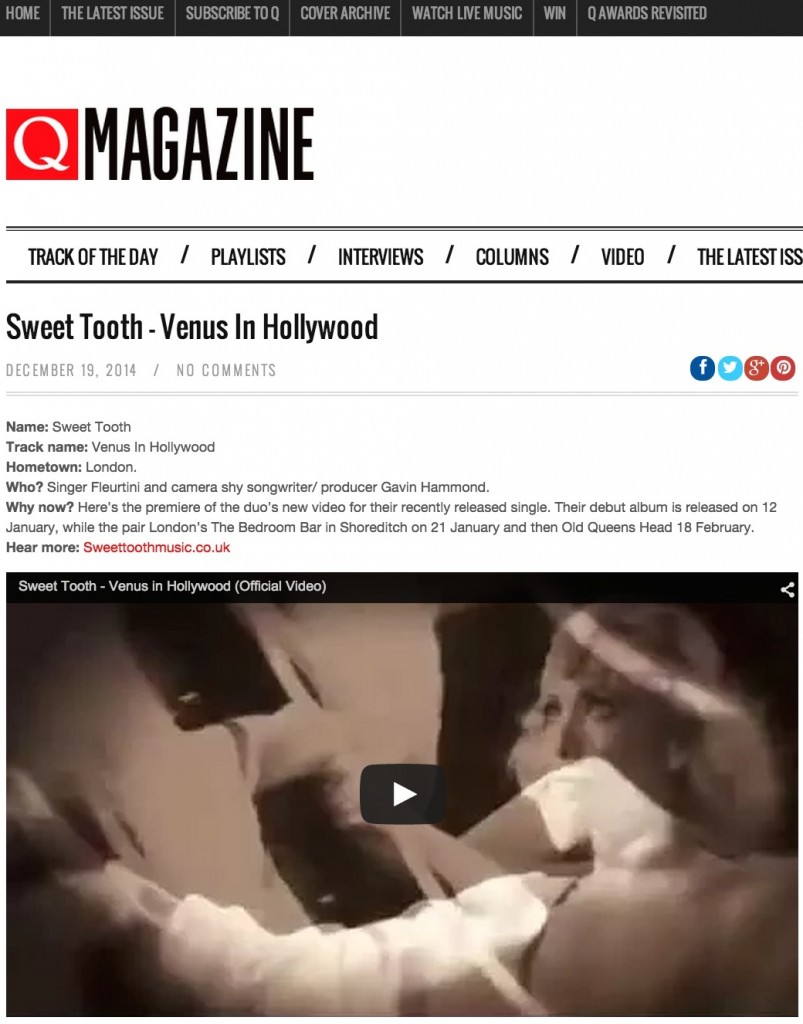 “The independent London-based band Sweet Tooth truly separate themselves from the crowd with their unusual and enveloping sound. Described as “cinematic”, they do not boast a genre-title commonly heard or referred to. To sum it up, one should imagine the soundtrack to a prohibition-era romance or the remake of a glossy black and white classic. That all-encompassing quality to an original soundtrack that pulls you effortless into the film is ever-present in Sweet Tooth’s ambient and laid-back sound…

…Sweet Tooth have created an LP with a swing in its step that can take you away to back alley piano bars full of chorus girls and dandies.” 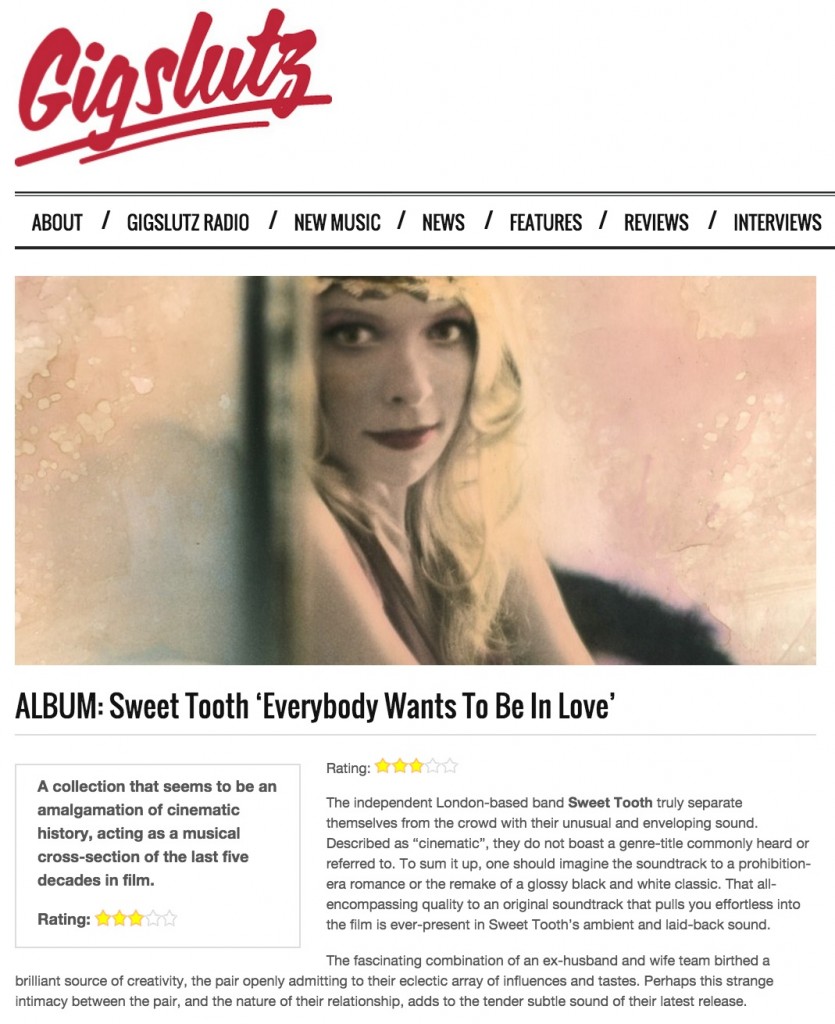 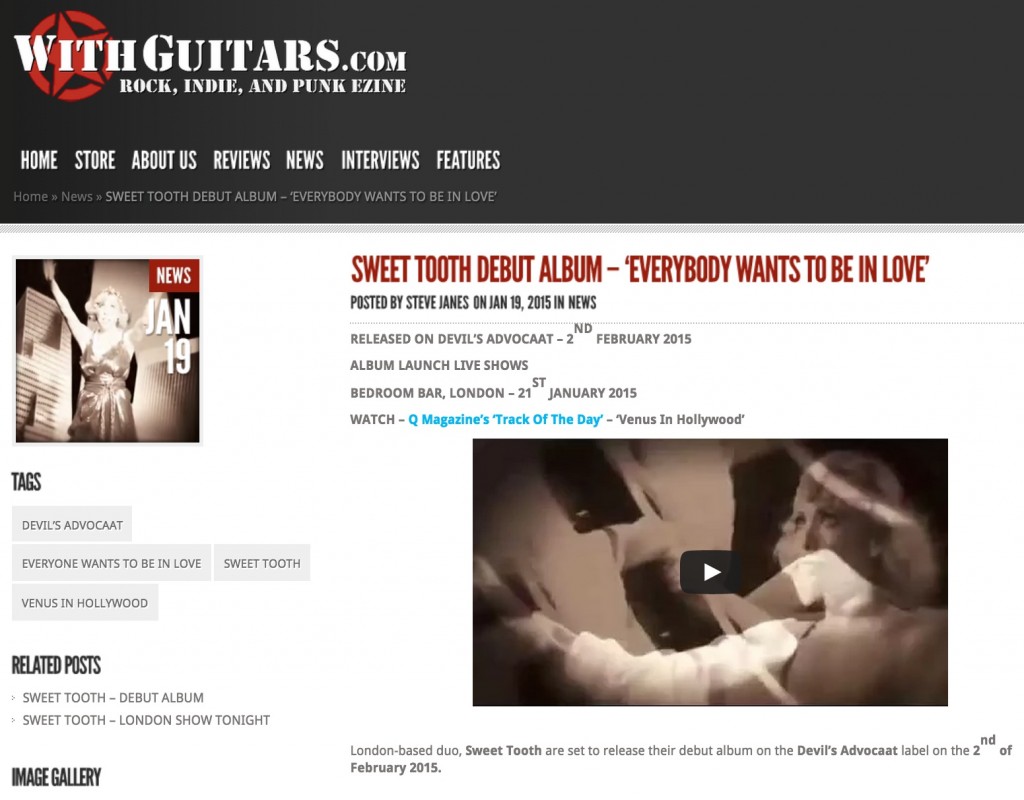 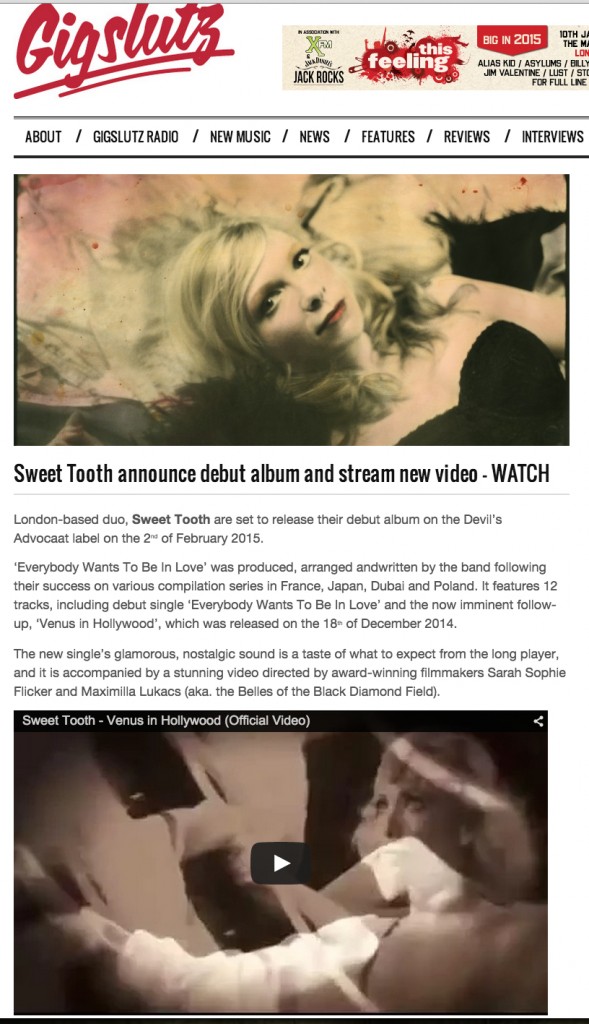 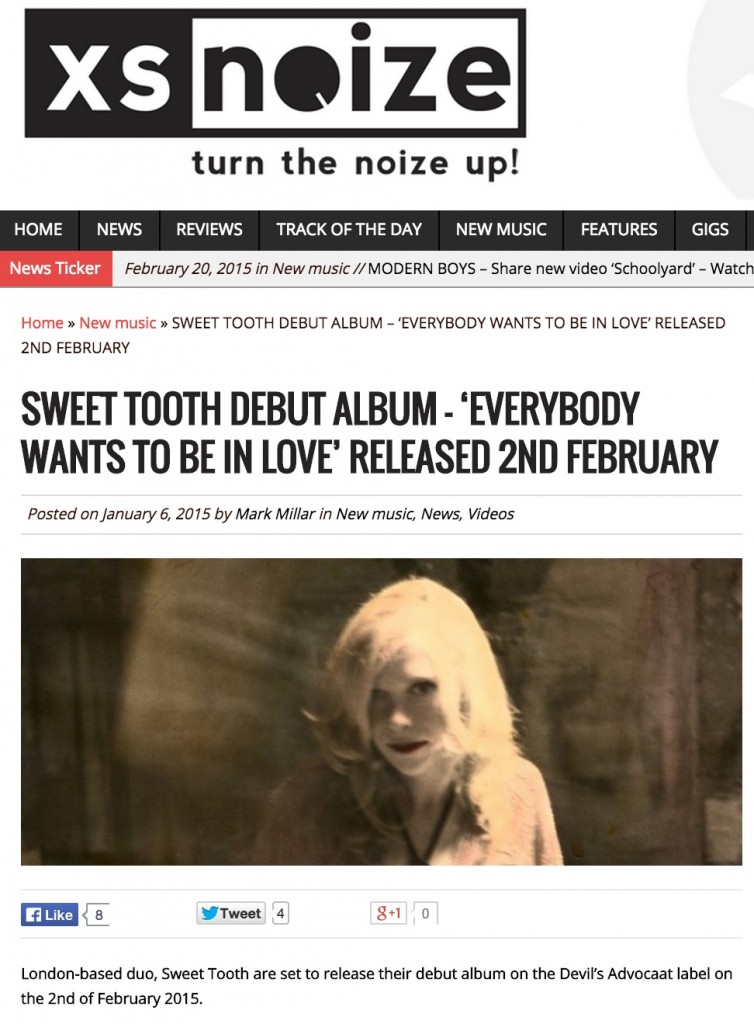 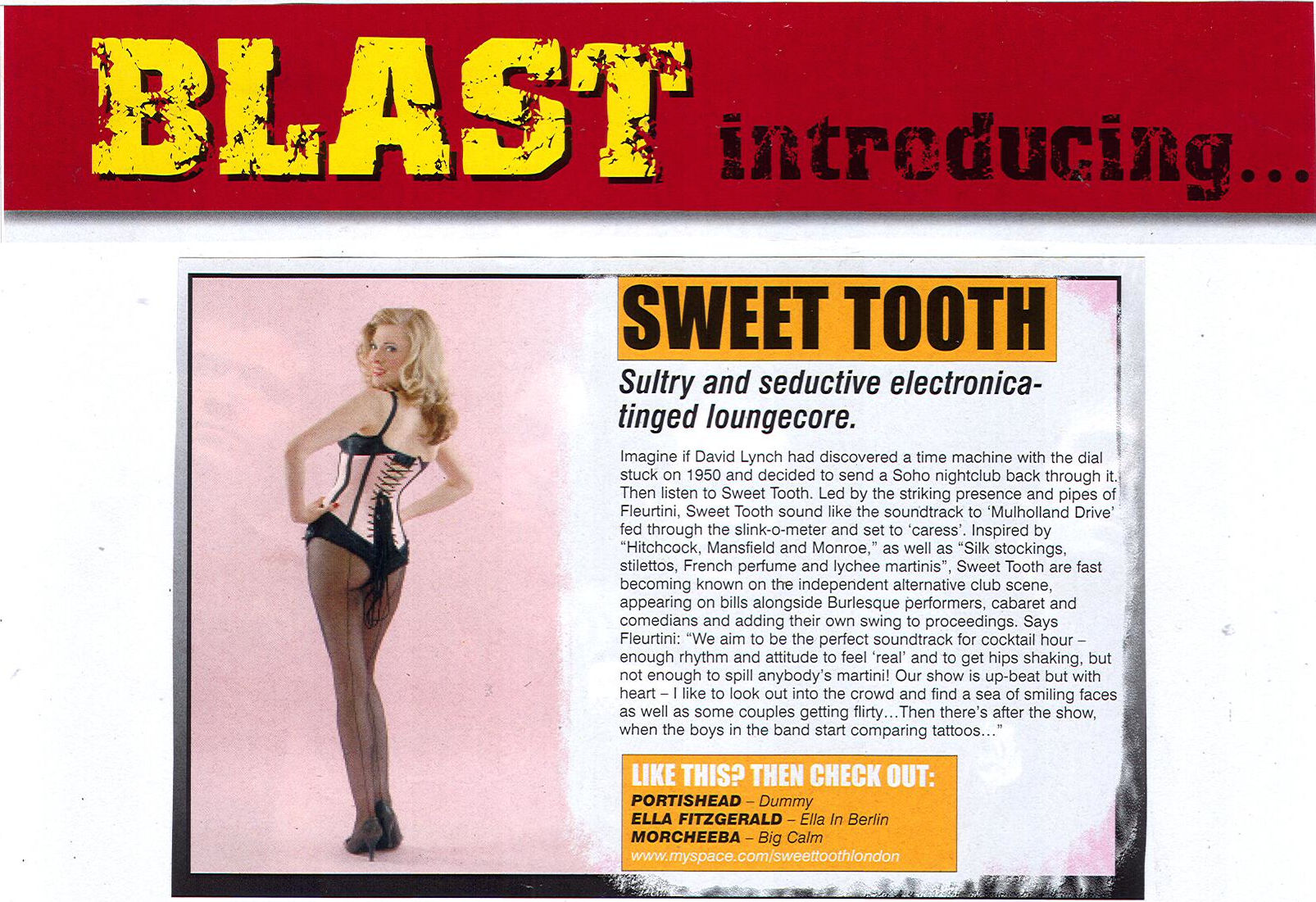 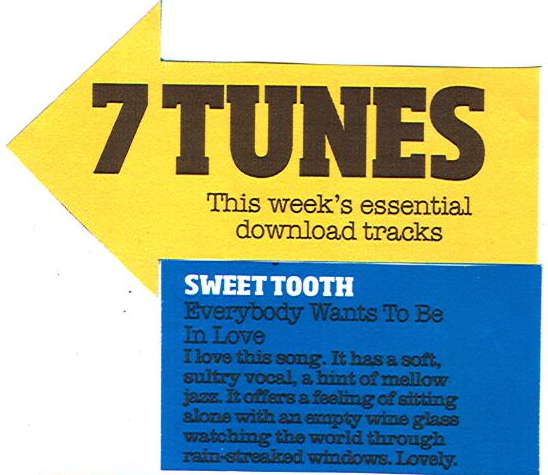 Take a peak inside Fleurtini’s closet with the marvelous Mademoiselle Robot:
http://www.mademoisellerobot.com/2010/06/show-tell-inside-fleurtinis-closet.html 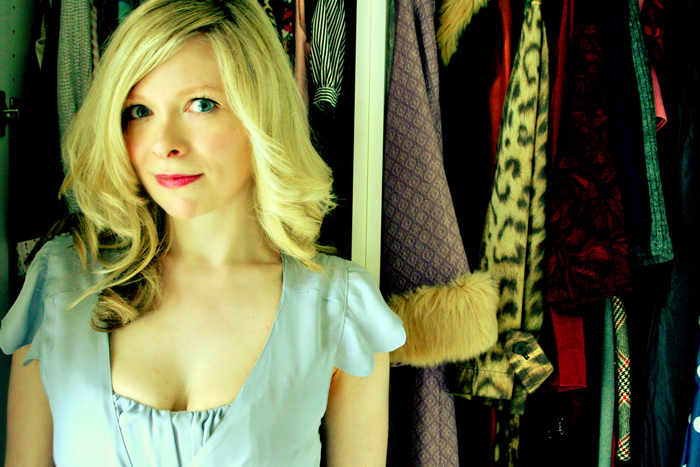 Plus links to a selection of the online magazines and blogs that have featured the video for ‘Everybody Wants To Be In Love’:

Beauty&TheDirt:
“We absolutely loved this tune and video when we watched it this morning we instantly wanted to turn the office into Ronnie Scotts and get the drink order in sharpish, then we remembered it was Monday morning. Imagine if you listened to it at night with a Martini in one hand and a handsome face to stare at across a club, as our hero Liz Lemon says, “I want to take me to there…..”
http://www.beautyandthedirt.com/2010/03/30/we-heart-sweet-tooth/

RouteNote:
“The title says all you need to know about the song’s heart. It is a glowing mediation on people’s desire for love with all the warmth and pathos that deserves. Piano lines and strings swell under Fleurtini’s sweet narration to form a lucid world of forgotten glances, tight embraces and broken hearts.”
http://routenote.com/blog/sweet-tooth-everybody-wants-to-be-in-love/

Beautiful Decay:
“Sweet Tooth is a gang of cool cats from London. Their music could soundtrack your rainy days and their new video is basically a moving graphic novel. Grab some popcorn and enjoy the show as the luscious voice of the lead singer guides you through your heartbreak you didn’t even know you had.”
http://beautifuldecay.com/2010/06/10/sweet-tooth/

Diana’s Words:
“Listen to Sweet Tooth from the UK.  The voice of the beautiful Fleurtini is loaded with sensuality and the music will make you grab your favorite drink, put your feet up and dream.  Sublime.”
http://dianaswords.blogspot.com/2010/06/music-and-me-2010.html

K@ri:
“This voice teases you and leads you to enjoyment…it makes you ponder on the realities of your life…it makes you feel what you wanted to forget…and remember what (sometimes) is best left forgotten.”
http://hubpages.com/hub/Everybody-Wants-to-be-in-Love

GreatMusicToday:
“This paradoxically aphrodisiac rhyme is the fruit of the collaboration of two Londoners Fleurtini and Gavin Hammond. Under the name of Sweet Tooth, these two guys seem to want, with all childish naivety, rotate the earth a little more gently.”
http://greatmusictoday.blogspot.com/2010/04/everybody-wants-to-be-in-love.html

MagicKrew:
“Say it with Flowers… The story of an upcoming passion… Because, my friend, when I listen such a song, my little (sweet) heart melts even faster than pistachio ice cream under sunshine.”
http://magickrew.magicrpm.com/382262/Dites-le-avec-la-Fleur-Sweet-Tooth-chronique-d-une-passion-annoncee/

The Culturist:
“This is a great song and video by Sweet Tooth. The illustrations in this video by Aaron Bevan-Bailey  should be printed and hung on walls…. For the record, if I can’t find love, then I wish I can be a chanteuse singing about love.”
http://www.theculturist.com/home/everybody-wants-to-be-in-love-by-sweet-tooth.html

Athens66:
“Their sound could be titled film-noir dub but I would rather name it as beautiful melodies to accompany Fleurtini’s warming voice…”
http://athens66.blogspot.com/2010/04/introducing-sweet-tooth.html