Tunnels of love No not that kind smutty mind - posted on September 9, 2010 by admin 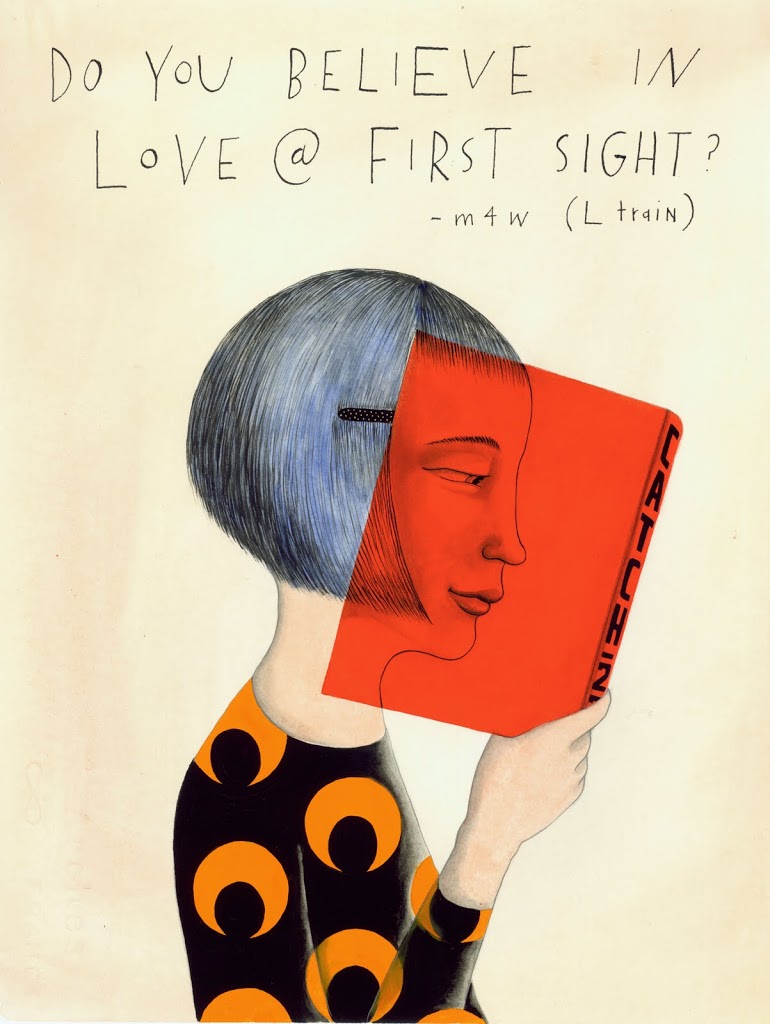 Some of you may have already heard about this (if you’re on Facebook), but I thought this little happening was too special not to share it again here.

A few weeks ago, sat in a subterranean carriage as it wound my way home, I was privileged to witness a young, besuited, ‘average Joe,’ engrossed as he jotted this down on a notepad:

“I’m on my way back to see you.
I’m excited, and smiling like a loon on the Tube.
Smiles are so rare these days, yet I feel like I’ve been in a London bar that sells passion,
and I’m greedy for more…”

It totally made my day.

I felt a little guilty spying on his scribblings, but he made no effort to hide them so I do hope he didn’t mind.

I’d love to see what Brooklyn-based artist Sophie Blackhall would do with this. Her ’Missed Connections’ prints transform ‘message-in-a bottle’ classifieds messages into whimsically beautiful illustrations.

This is just one sweet example – check out her blog for more (or Etsy to purchase): 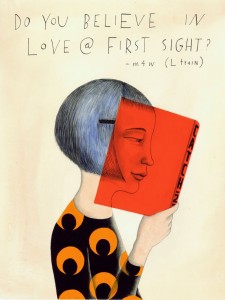 Tuesday, October 6, 2009
-m4w (L train to Manhattan)
You were reading Catch-22 on the subway this morning. I have never seen such a beautiful profile. I wanted to say hi, but then you’d turn towards me and I wouldn’t be able to look at your profile anymore. You were so into your book, I don’t think you noticed me falling in love with you. But I thought I’d ask, just in case.

Blackhall told the New York Times that her illustrations have “recurring themes of love, loss, regret and hope. Even the most grim postings have this little kernel of unflagging hope which is just so lovely and optimistic. I think that is what appeals to other people, too.”

Have you ever found a note, or stolen a snippet of a conversation, that turned your mood around, even for just a moment in time?

The sweet smell of success?

How fun would it have been to write the soundtrack to this short film for Dior Homme by Guy Ritchie starring Jude Law? Hope we get the call next time… Guy(s)?

Tweet
fleur grants wishes, if you're lucky - posted on September 7, 2010 by admin 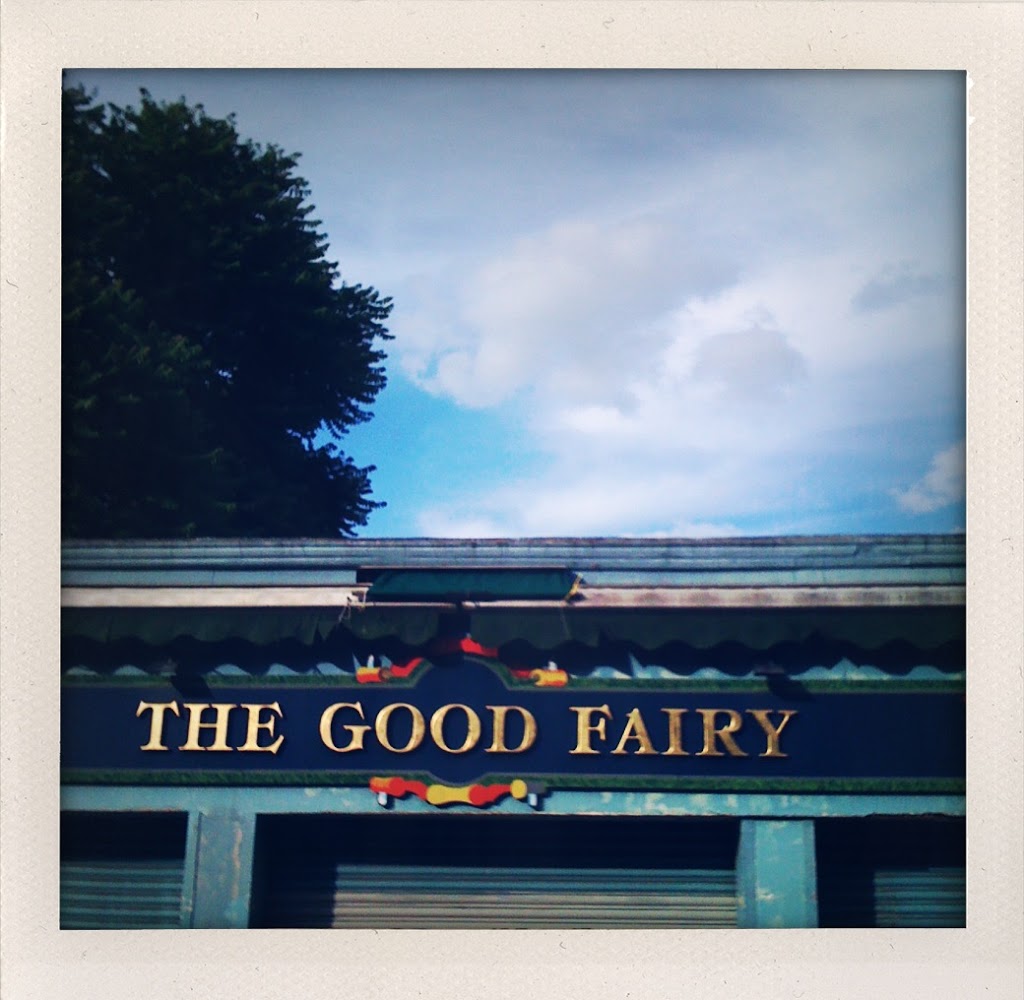 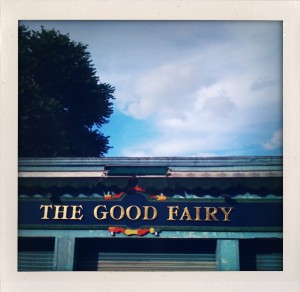 The Good Fairy is an antiques emporium on Portobello that I often pass on my way to the wonderful vintage clothing market further down the Road.

Though I’m sure the store holds some lovely treasures, it’s the name which grabs my attention, as from a young age I was completely and utterly obsessed with fairies. I wore my little costume until it pretty much fell apart (see pics below). I used to leave messages for the elves I just knew were in our garden. And whenever we did creative writing at primary school I would add another bloom to the series of ‘Flower Fairy’ stories that I was the proud author of. 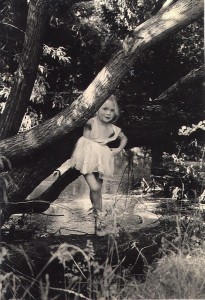 Did this innocent childhood interest enamour me to my peers and teachers? It most certainly did not. “Fairy Fleur” became the name they used to tease me mercilessly (I marvel now at the cruel twist children could add to a seemingly sweet nickname). And my mother was incredulous reading worries about my “lack of imagination” in teacher reports, referring to my stubborn focus on one topic for story writing (bear in mind this was the school that praised my high reading age but refused to let me borrow more challenging books from the library). 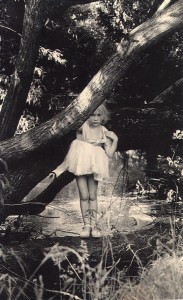 Now I have to say that my infatuation with fairies hasn’t particularly carried on into adulthood (bar a brief period where I donned wings at raves and granted revelers ‘wishes’ in a cloud of glitter – all photographic evidence of which has since been destroyed!). What I do love is the fact that what set me apart at school is something that I now think of fondly as I wander down Portobello Rd – no doubt it began my adoration of vintage clothing, and that same “lacking imagination” is now what feeds my performances, writing and day-dreams…

Do you have a quirk (past or present) that you’ve decided to embrace with open arms? Care to share? We’d love to hear them (and you’ll help test our comments function – we’re still feeling our way around this blog!).

It’s pouring with rain here in London town, and though we’ve only just slipped into September the balmy evenings and sunny days seem to have packed their bags and migrated south for the winter.

This quirky little video just cheered me up though (and not just as we’re obvious fans of the cut-out clip, here at Sweet Tooth Towers!).